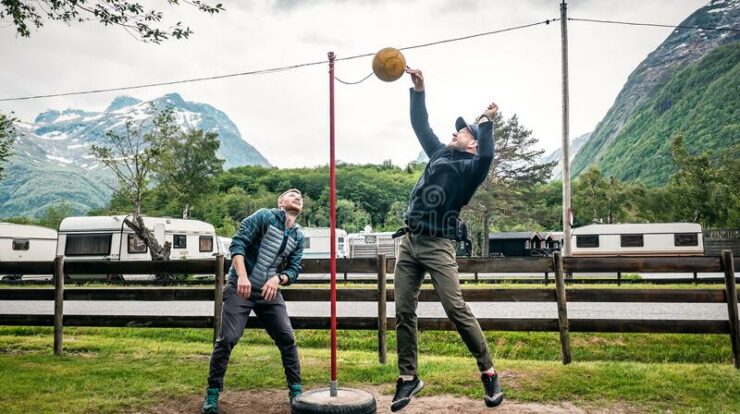 Tetherball may be a fun addition to your backyard pastimes if you have the room. We wanted to know how to play tetherball properly after striking the ball back and forth for a time. This tutorial will teach you all there is to know about tetherball.

Tetherball requires two players and a tetherball court. To win, you must hit the tetherball past your opponent enough times for the rope to loop around the tetherball pole. You must stay within the court’s bounds and avoid fines by playing according to the game’s regulations.

Tetherball is mostly played in an informal setting, with many participants creating their own house rules. It’s better to learn how to play the official tetherball game first, then modify the rules as you see fit. 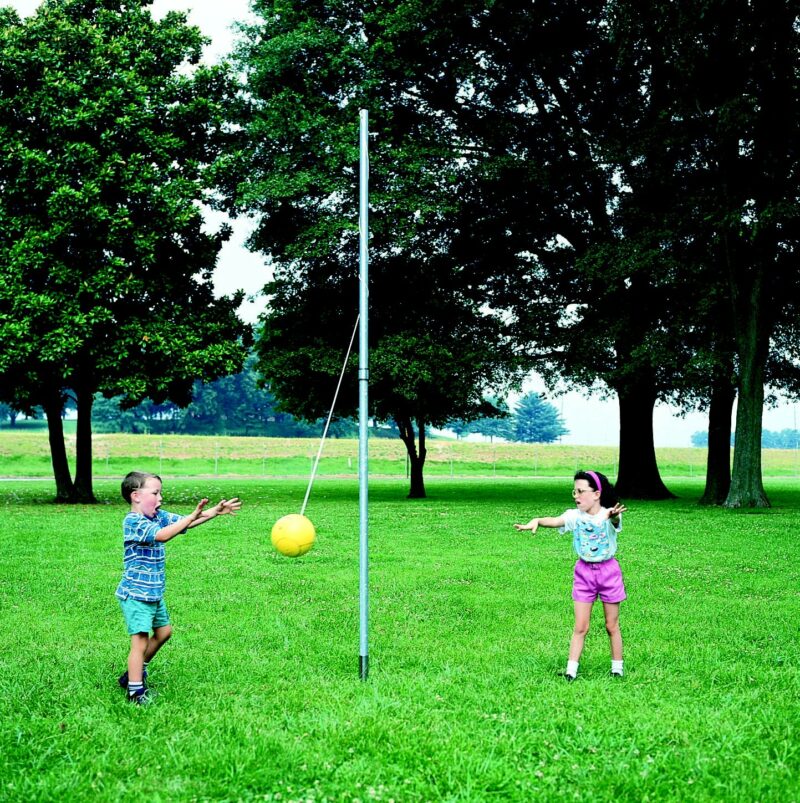 Because the ball is tied to the pole by a rope, when you smash the ball past your opponent and back around to your side of the court, the rope will wrap around the pole. You have to stay within the bounds of the court and avoid penalties to win the game. Some infractions result in an automatic loss, but more on that later.

In a typical game, both players will hit the tetherball back and forth. The aim is to hit the ball out of the opposing player’s grasp. This is done in the expectation that your opponent will drop the ball. The ball will return to you, and the rope will wrap itself around the pole in your favour.

The tetherball rope becomes shorter as it loops around the pole, increasing the difficulty of the game and the speed of the ball. The contest is ended when the rope has looped around the pole so many times that it can no longer wrap around it. 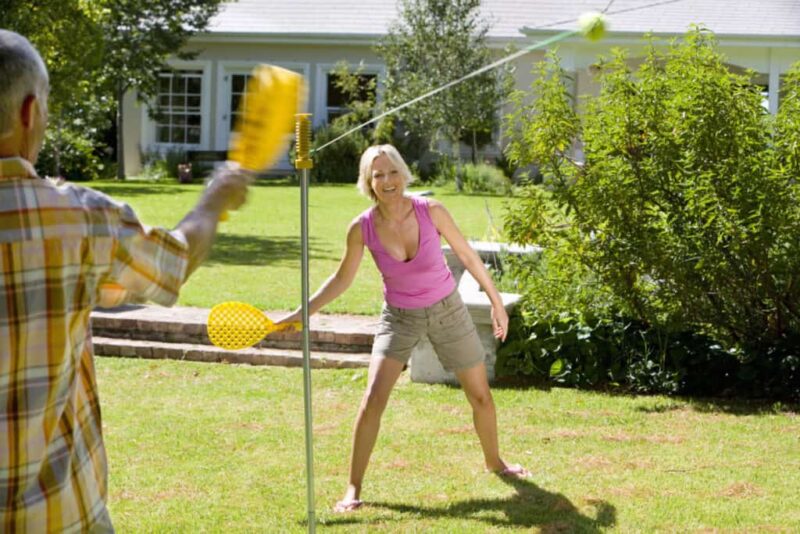 Setup of a Tetherball Court

Dimensions of a Tetherball Court

A classic tetherball court consists of a 20-foot diameter circle divided into four parts. If you’re making the court for children, you might want to go with a 16-foot-diameter circle. The court will serve as the tetherball game’s playing area.

Simply draw a big ‘X’ in the centre of the court to divide it into four halves. Two of the parts will be play areas, while the other two will be out of bounds or foul zones. Some players choose to divide the court into two portions, one for each player, with no out-of-bounds area in between. Here’s a diagram of the tetherball court zone layout: 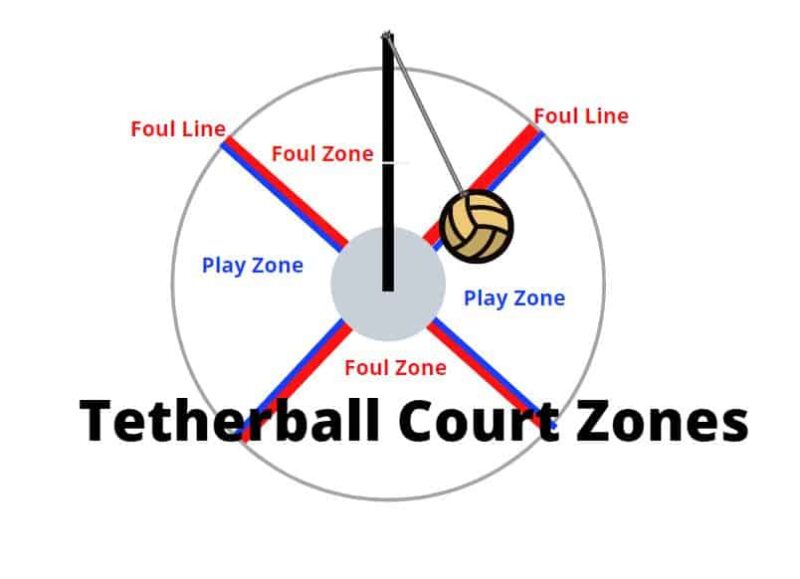 The Length of Tetherball Rope

A tetherball rope for a 10 foot pole is usually approximately 7 feet long. The length of the rope might vary depending on the size of the pole. When hanging freely by the rope linked to the top of the pole, the ball will typically sit 3 feet above the ground.

You may modify the length of the rope to suit your needs. For example, if you intend to use an 8-foot pole for children, make the rope about 6 feet long. This will let the tetherball dangle freely 2 feet above the ground. This appears to work much better for the youngsters, who may be having difficulty playing the game as it is. Here’s a handy graphic of the tetherball setup lengths: 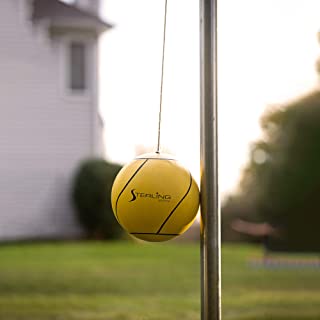 All that remains is to lay out the court in a suitable level location and set up the tetherball pole. The rope and tetherball setup is largely the same whether you make your own tetherball court, buy a temporary court, or build a permanent tetherball court.

Installing Tetherball Rope And A Ball:

Here’s a tetherball cost and comparison chart to help you pick a set that’s right for you. You’ll be searching for either a portable or permanent tetherball system, and I’ve identified the best solutions for both. In my experience, the cheaper poles and tetherball kits seem to last less than a year.

If you intend to install a permanent tetherball pole, the package will usually include a 12 ft. pole. To make a 10′ tetherball pole from ground height to the top of the pole, bury 2 feet of the pole in the ground. 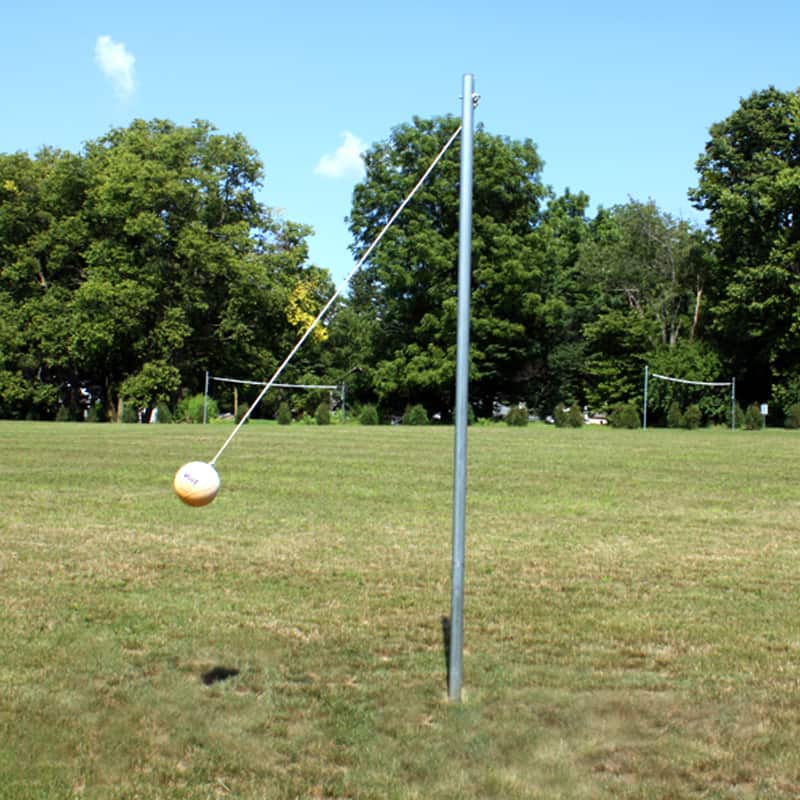 How to Begin a Game

You understand the fundamentals of the game, including how to set up the court and the pole. It’s finally time to start playing. To begin a game, one player serves the ball to the other. It is up to you to pick who serves first. Some people enjoy playing rock, paper, scissors or flipping a coin.

Others prefer to hold the ball over the foul line and then release it. The first server will be whoever the ball bounces to after it strikes the pole. Typically, whoever wins the first round becomes the server for the following round, and so on. Before the game begins, the server will wrap the tether around the pole once in the opposite direction of the serve.

Now that you know how to start a game, you should know how to finish it, other than winding the rope around the pole all the way.

Tetherball has basic rules, but adding house rules may make the game more intriguing and exciting. There will usually be a list of fouls. If a player commits a foul, they are automatically eliminated from the match. The following is a list of common tetherball infractions.

I’ve made a printout of this rule list with a space for you to add any home rules you come up with as you go. We keep this near the tetherball court as a reference in case there is ever a debate regarding which game regulations we are following. 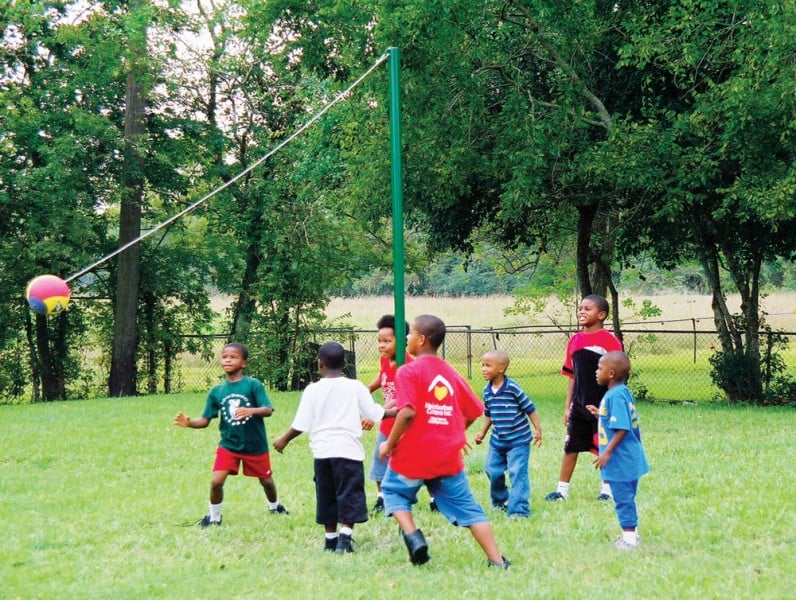 If two players commit a foul at the same time, neither player can win the match. Instead, the match will be restarted with the original server serving the ball once more. An interesting option is a house rule in which both players stand with one hand on the ball and let it drop. The ball returns to play after striking the pole, and the game resumes.

This is where you may spice up the game. Many backyard tetherball players may develop their own house rules. It comes with the territory; if you’re playing on someone else’s court, you must abide by their house rules. Consider the following home rules:

Choose from this list or make your own home rules! This game is all about having a good time.

A tetherball game typically consists of seven matches, each earning one point. The game is won by the first individual to win four matches. A point is earned by winding the tetherball rope as far as it will go around the pole. A player can also win a match if their opponent fouls.

Any violation of the regulations outlined above results in an immediate loss of the match and a point for the winner. Some house rules may demand that a game be decided by two points. For instance, if the score is 3 points to 3 points, the following match does not determine the winner; instead, the winner must have 5 points to win the game against a 3 point opponent. This can cause the game to lag a little, but it provides for an exciting game finish. 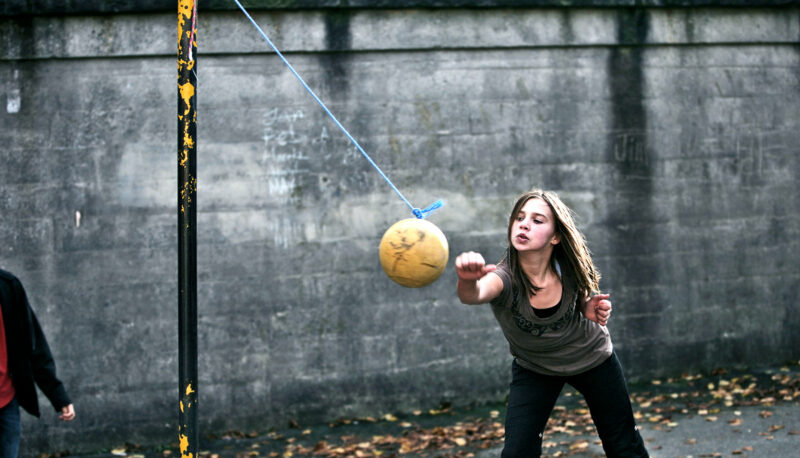 You will undoubtedly improve at tetherball as you play more, but there are several tactics you may use to win every time. Okay, maybe not every time, but these pointers will give you an advantage over your opponent.

Hitting with an open palm vs. a closed fist has radically different consequences. When you strike the ball with your open hand, you have greater control over where it goes. Hitting the ball with a closed fist, on the other hand (haha), will offer you a lot more power.

On a closed-hand hit, try not to contact the ball with your knuckles. This might lead the ball to swing erratically off course. For the greatest force and precision, whack the ball with the side of your closed fist.

You can try to fool your opponent by pretending to go for a power move or a slam hit, prompting them to back up or shift position before softly tapping the ball. Alternatively, vice versa. The aim is to get the ball past your opponent and back around the pole as many times as possible in a row, so a little deception may assist.

Keep your feet light; your opponent may pick this up and try to use it against you. The only difference is that you can prepare for it. Maintain the upper hand throughout the game by keeping your opponent guessing.

Striking the ball at a downward angle with power might drive the ball up and over their heads. If your opponent is unable to reach the ball, they will not be able to return it to you, giving you a wrap around the pole. You may sometimes get into a rhythm by maintaining the ball on the same trajectory and racking up a couple wraps around the pole in a row.

The History of Tetherball

Tetherball was invented in the 1800s using a tennis ball tied to a pole and a racket. This was preferable to tennis since there was no need to go around the court chasing a tennis ball. It was initially known as tether tennis and was largely played by wealthy English people.

Tether tennis was played without rackets sometime along the line. As it got increasingly popular for the average person to participate, players began just hitting the ball with their hands. The tennis ball was replaced in the early 1900s with a volley ball-sized ball.

Tetherball rose in popularity throughout the early 1900s in England and the United States due to how inexpensive and simple it was to install in a school playground. Tetherball courts are now available at school playgrounds, public parks, beaches, leisure areas, and even backyards.