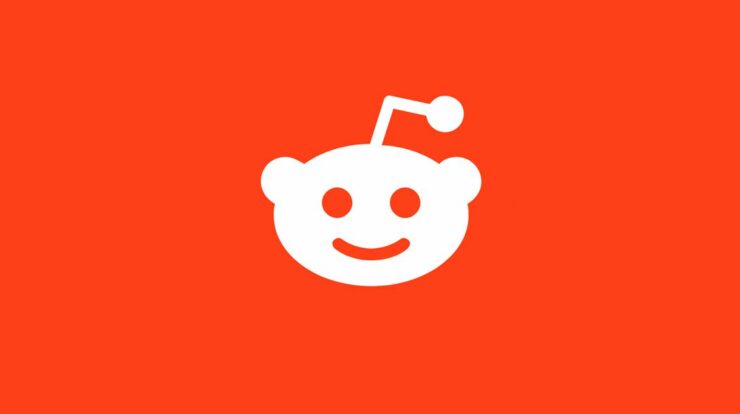 Reddit is a social news site where people who have signed up can post links or messages. Over the past few years, Reddit has grown quickly and become a popular place for people to share and find new online content. Even while Reddit forbids you from constantly spamming their platform with your own material, you may still publish your finest stuff there, and if it becomes popular, you may get a tonne of visitors to your website. The postings are then organized and assigned a position on each page of the site’s category listings, which are sorted by score and by registered users who can vote them up or down.

It is made up of subreddits that let users sort the information on Reddit into different groups. On these community-based subreddits, other users have posted links, text posts, and photos. Even though Reddit is one of the most popular online social media sites, it has a number of major flaws that have led many users to look for other options.

Its prohibition on uploading particular kinds of information is the first disadvantage.  The way the website manages communities is yet another serious flaw. Reddit doesn’t say they can’t have subreddits, but if they act badly, like breaking the rules or getting too heated, they shut them down. This means that even while you are unable to add new content to certain subreddits, you may still see them on your feed. The article continues by listing 15 Reddit substitutes.

Steemit is a social media and blogging site with blockchain capabilities.  Based on their own interests, users produce and curate material on the network. People get STEEM coins when they make contributions and vote “up” on popular content. The majority of the platform’s content is focused on Bitcoin and other cryptocurrencies. By giving out STEEM tokens, users can get paid for their work and build communities of people who share their interests. 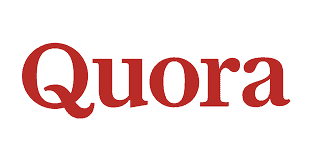 The structure of posts on Quora, a social network for questions and answers, is similar to that of Reddit.  In a particular post, users can ask questions and offer in-depth explanations. On the basis of the first inquiry, the community then answers their questions with information or viewpoints.  Following that, the public can vote the answers up or down. By doing this, it is ensured that the best responses rise to the top of the list and the worst ones fall to the bottom.  The use of actual identities by users is necessary in order to increase the legitimacy of each answer made on Quora. 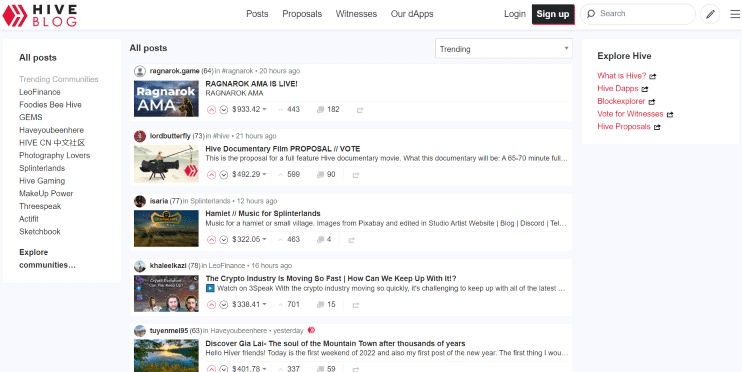 Another blockchain-based social media site with Reddit-like features is called Hive.  On the site, users may engage in a variety of discussions in different communities. The Hive allows customers to access a variety of blockchain functionalities through numerous applications and bitcoin wallets. Users may tip each other in bitcoin while debating issues that are dear to them.  The site is constantly adding new blockchain-related features, and its user base is expanding. 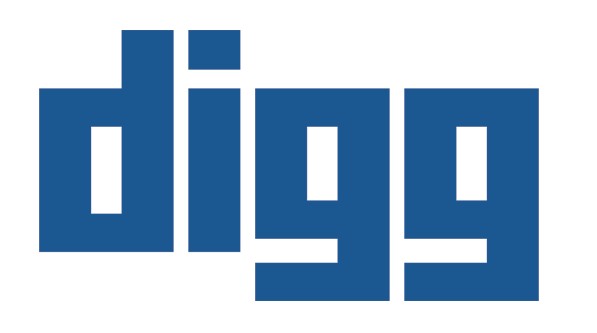 Digg is a news aggregation site in its present form. The site gathers the most popular online content and makes it available to people who visit. Science, politics, or viral material make up the majority of the platform’s content.  Users may read the articles and vote on the ones they like to change the homepage. A long time ago, Digg had a more developed upvoting and downvoting mechanism, which served as an inspiration for Reddit’s conception. Digg’s current focus is news aggregation, yet the platform still offers a few light social elements, such as the ability to exchange articles.

Uptrend is used by more than 140,000 users to publish comments and material.  Users may conduct transactions on the site utilizing 1UP, which is powered by blockchain technology. Users can reward one another for uploading high-quality content by using the 1UP token.  These prizes are given to content producers, who then continue to contribute back to the community. Posts can be about almost anything, and the ones that get the most attention are rewarded. Even though people talk about other things, bitcoin is a common subject on the platform. 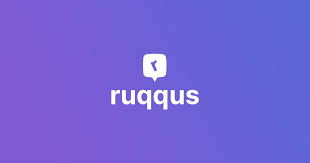 A competitor to Reddit called Ruqqus forbids any kind of restriction.  Users can make their own guilds, which are online groups, but they can’t get rid of the information in them. The only person who can remove a post is the author. By design, censorship is impossible, so anybody may publish whatever they want.  There are no systems in place for guild leaders or users to censor one another. To avoid legal problems, the platform’s admin staff eliminates unlawful information.  Ruqqus supports and upholds free expression to a greater extent than any other site.

Saidit makes an effort to recreate the magic of Reddit’s early years, like several Reddit alternatives. The look of the platform is a little bit like an older version of Reddit. Users can make an account without giving an email address, which gives them more security and privacy. Instead of “upvoting,” Saidit instead uses the terms “insightful” and “funny.” With these options, users can choose at any time which type of information they want to look into. Each community on Saidit has its own IRC chat window, which is a great feature not found on other platforms.

Another Reddit substitute that forgoes filtering is Communities.win.  Users can establish their own communities to talk about particular subjects. They can then upvote the material they enjoy.  Like on comparable platforms, the most popular material inevitably appears on the homepage. There are moderation teams for every community, but in most communities, freedom of expression takes precedence.  The majority of material kinds are accepted in Communities.win as long as no laws are breached. Every day, tens of thousands of new topics are added, and the community as a whole keeps growing.

Poal invites its users to participate in all conversations and debates.  A person can make subs depending on their preferred subject. They then decide on the posting guidelines for their sub and the moderating policy.  Depending on the choice, comments or upvotes can be made on content. Poal errs on the side of free expression, and most communities have rather loose moderation.  For obvious reasons, no unlawful or spam content is permitted on the site, for obvious reasons. Users can write down whatever they want and talk about it with other people who think the same way. 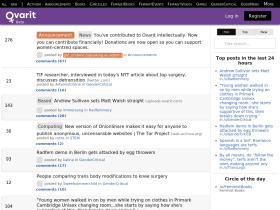 Ovarit is a Reddit substitute that targets women alone.  Users of the site may establish “circles,” or smaller communities, and have conversations within them. Every piece of content on the platform often focuses on the interests and empowerment of women.  All genders are welcome on the site, but women dominate the conversation there. Ovarit employs effective moderating techniques to prevent abuse and harassment while maintaining an overall positive stance in debates and themes. The platform is still in beta, and its user base is expanding.  Both men and women are encouraged to join the group and start a conversation. 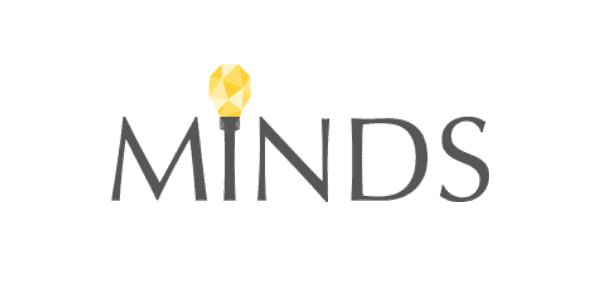 A social networking site called Minds encourages candid dialogue.  Although this network has Reddit-like characteristics, it aims to be the anti-Facebook. People may make their own profiles and exchange stuff with other users after signing up.  Users are able to start conversations, whether in public or privately. By helping out on the site, users earn tokens that they can use to improve their accounts and reach more people. Fans of certain people can tip them in cash or cryptocurrencies to show their appreciation. The First Amendment is the most important part of Minds’ content policy, and the content that comes from the community jury is moderated.

Gurlic offers a unique take on the Reddit model.  On the platform, several communities and themes are offered.  But each piece of information has to have a direct connection to an appropriate URL. No material with a paywall can be listed on the platform.  The media that is placed on Gurlic must also have a direct link or a download file. Gurlic wants to give consumers access to themes in science, technology, art, and other fields.  Users may then share material, leave comments, and upvote certain posts, much like on other sites.  The majority of the platform’s material is excellent and thought-provoking. 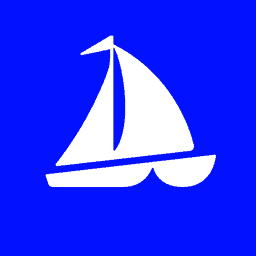 Flote promotes itself as an uncensored social network.  The platform responds to big tech censorship and ambiguous community standards. Every user of the site can send and receive encrypted messages, and free speech is guaranteed. Additionally, no user data is ever sold to outside parties. Users on Flote are free to publish whatever material they like and to upvote it.  Additionally, Bitcoin may be used to tip content authors.  To better serve consumers, the platform often adds new features. 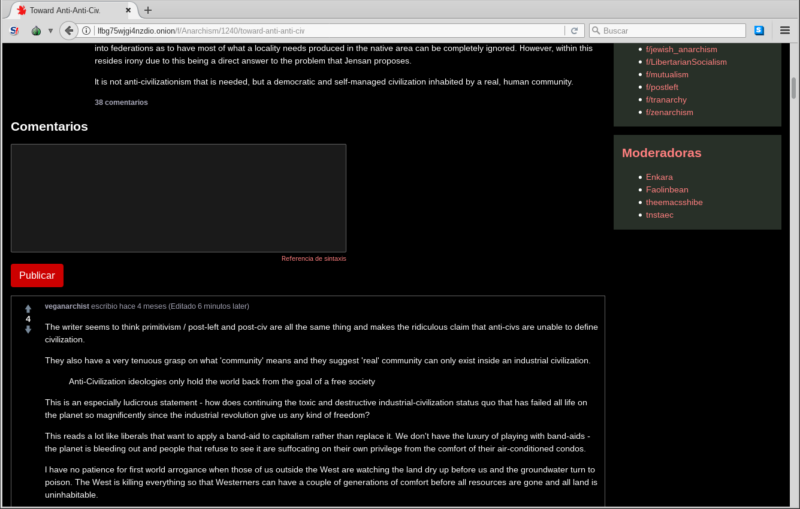 The best way to describe Raddle is as a forum for anarchists and extreme leftists that works like Reddit. The website criticizes authoritarian governments and social media in general. The website really started off as a Reddit subreddit. The subreddit was shut down without a good reason, and now anarchists can use Raddle.me instead. Although it can seem bad, the platform supports anti-authoritarian beliefs. The site has the right security measures in place to protect user information and moderate it in a clear way.

A social media site with an emphasis on business and computer science is called Hacker News. The website has strong tools for moderators and is a safe place for people who like hacker culture. Users cannot flag or downvote anything after signing up unless they have amassed enough good karma. The site has tight moderation, and most users devote a lot of time to the subjects they find interesting.  Hacker News makes an effort to replicate Reddit’s early user interface.  Here, a wide range of communities and topics are addressed.  High-quality materials are also available.

These are some of the top Reddit substitutes that can be found online. It is crucial to remember that Reddit substitutes fall well short of the original. Reddit appears to have the whole market share in this niche despite the fact that there is already a tonne of competition, and it is unlikely that it will disappear very soon. Even though it seems like they have taken over every part of the internet, that doesn’t mean you can’t find good services on other platforms.

Reddit is a site for finding content where you can find the most popular articles on almost any topic you can think of. It may be used as a search engine for material as well as a social bookmarking site.

What is a subreddit, exactly?

You can think of subreddits as separate topics or groups that are used to organize information from different Reddit topics.

Which Subreddits Are the Best?

It is hard to choose a handful as the greatest subreddits because there are many of them.  It also relies on your personal interests.  Check out this post on the finest subreddits to subscribe to.

Reddit is, in fact, free to use.  You have the ability to generate engaging material.

To become successful on Reddit, just like on any other social media network, you need to be active.  You may participate on the platform, share the best online information that hasn’t been posted previously, and leave comments on other people’s articles to gain karma.