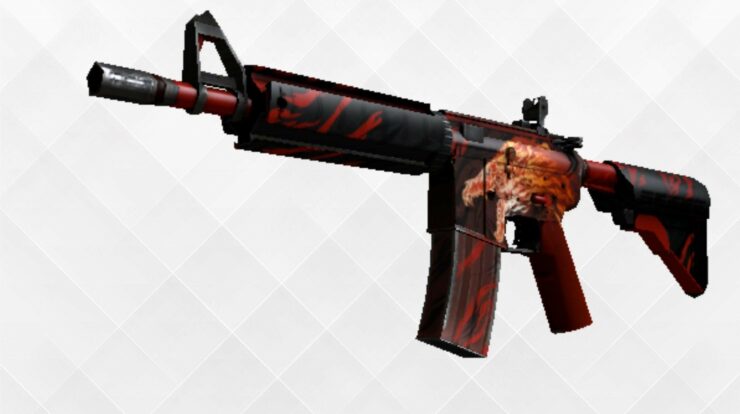 In 2021, it was reported that the M4A4 | Howl skin with rare stickers was sold for $122,000. The record was set on the Buff platform, and the buyer has already been marked by similar acquisitions. Over the past years, CS:GO has experienced several record sales at once. Back at the beginning of 2021, an anonymous Chinese collector bought the AWP | Dragon Lore for more than $150,000. A little later, a Dane with the nickname Luksusbums decided to purchase an AK-47 | Case Hardened for a similar amount. However, he did not stop there.

Who Has Bought the Legendary M4A4 | Howl?

This time, the Danish collector wanted to add new weapons to his inventory. He was interested in a unique piece of the m4a4 howl in Factory New condition with StatTrak and very expensive stickers. It is worth starting with the fact that even the skin itself is really very rare, and it is unlikely that you will be able to find it on the Steam marketplace. On third-party resources, such an item without stickers can be purchased for about $18,000.

Also, it is worth noting that there are stickers that the previous owner put on this assault rifle. On this skin, you can see four holographic stickers with the emblem of the eSports team iBUYPOWER from the EMS One Katowice 2014 tournament. This is one of the rarest stickers in CS:GO, and they can only be purchased on special marketplaces. One such sticker now costs at least $15,000, and there are four of them at once.

For all this “pleasure”, the well-known collector Luksusbums has paid a huge sum of $122,000. It is also worth adding that such collectors usually use special platforms or work directly with a potential seller. It happens often, but this deal was an exception. A user with the nickname ohnePixel noted that this operation was carried out through the Chinese online platform Buff. He also added that for such sites, that deal became a record.

Why do People Buy CS:GO Skins?

Surprisingly, buying thousands of dollars worth of Counter-Strike skins is the norm in the video game community. People buy and sell in-game items daily. These are usually micropayments ranging from $1 to $25. But there are much more impressive deals. You can sell skins fairly quickly, as quality weapons and equipment are always in demand. But why are players willing to give money for virtual skins?

No one will spend thousands of dollars on items that can be found in the public domain. This is why skins can be so expensive. For example, in 2018, a gamer paid $61,000 for the Dragon Lore rifle, which is one of the rarest items in CS:GO. Today, such a rifle can be sold for $150,000. The cost is determined by the rarity of the item. If there is something useful in the game but hard to find, people will buy it.

Most people will take pride in owning a rare weapon skin in their favorite video game. The same is true in real life. Football fans are proud to own a pair of boots signed by famous players. The autograph of a famous rock star or movie actor can be sold for a lot of money. In the Counter-Strike community, the struggle for the right to show off something unique is so common that players spend a lot of money to own skins. Some people give away their less valuable weapons to be able to use more prestigious items for at least a short time.

The man who sold the Dragon Lore rifle made $150,000 from it. Some people professionally hunt the rarest and most valuable items, buy them, and then resell them at a higher price. Many players do the same. It is similar to trading company shares on the stock exchange. Sometimes you can hit a solid jackpot.

It may sound pointless to you, but people pay up to $1 million for autographed T-shirts or the possibility of just hanging out with celebrities. So why are skins worse? Obviously, they are not.