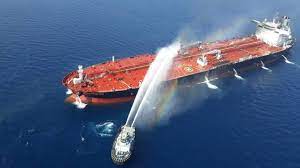 Companies that operate Largest Oil Tanker Companies are specialised in the transportation and storage of crude oil. The company owns, operates, or leases several types of oil ships and facilities. Crude tankers transport large quantities of unprocessed crude oil between oil extraction plants and refineries, whereas product tankers transport refined products to facilities where they will be sold to end consumers, and replenishment oilers refill ships at sea.

In early 2020, one sort of Largest Oil Tanker Companies In The World that gained prominence was old, inoperable oil tankers utilised as floating storage facilities. Russia’s and Saudi Arabia’s oil price war, combined with the impact of COVID-19, resulted in a collapse in oil prices as a glut of supplies flooded the market. As demand for oil dwindled, need for oil storage increased exponentially. Oil tanker firms that offer storage benefited from this demand, and their stockpiles increased significantly.

International Seaways, Inc. is one of the world’s largest tanker businesses, offering crude oil and petroleum product transportation services. The firm owns and runs a fleet of 36 vessels, including 11 VLCCs, two Suezmaxes, four Aframaxes, thirteen Panamaxes, and four MR Tankers.International Seaways owns a portion of the floating storage and unloading boats it operates.

Navios Maritime Holdings Inc. (“Navios”) is a vertically integrated worldwide seaborne shipping and logistics firm that specialises in the transportation and transshipment of drybulk commodities such as iron ore, coal, and grain.
US Steel founded Navios in 1954 to carry iron ore to the United States and Europe. Since then, Navios has diversified regionally and extended the scope of its commercial activities to the point that it now has 49 boats with a combined deadweight tonnage of roughly 5.1 million.

TNP is placed seventh on our list of the world’s largest oil tankers. Tsakos Energy Navigation is one of the world’s biggest and oldest independent energy carriers, operating a modern fleet of 64 high-capacity crude oil and oil product tankers, shuttle tankers, and liquefied natural gas (LNG) carriers.
The firm has grown to become one of the world’s largest operators of ice-class tankers among the main multinational oil majors. Tsakos Energy Navigation is active on a global scale, with operations in Greece, the Philippines, Ukraine, Russia, and Romania.

Euronav is a firm headquartered in Belgium that specialises in the transportation and storage of crude oil.
Through its tankers business, it provides shipping services for crude oil seaborne transportation.
Through its floating, production, storage, and offloading operation parts, it collects hydrocarbon fluids pushed from neighbouring offshore facilities and offers field storage.
Euronav also manages crews, ships, and fleets.

Scorpio Largest Oil Tanker Companies is a shipping firm established in Monaco that went public in 2010. It is a global provider of sea transportation for petroleum products. The firm is divided into four divisions, each representing a particular type of ship. The corporation owns and operates more than 100 boats.

Frontline is an international shipping firm headquartered in Bermuda that owns and operates oil and commodity tankers. Additionally, the corporation provides seaborne transportation for crude oil and petroleum products.
Frontline was formed throughout the last decade through a series of significant restructurings, mergers, and acquisitions.

DHT is an independent crude Oil Tanker Companies headquartered in Bermuda that provides transportation services to oil corporations. Through integrated management businesses based in Monaco, Singapore, and Norway, the corporation runs a fleet of crude oil tankers.

Teekay is a Canadian corporation that specialises in crude oil, LNG, and liquefied natural gas (LNG) ships.
Teekay is one of the world’s leading operators of medium-sized tankers, with a fleet that includes Suezmax, Aframax, and long-range vessels (LR2).Teekay currently has a $12 billion network of gas and oil tankers, as well as offshore facilities, with headquarters in Canada, the United Kingdom, the Bahamas, Bermuda, and Singapore.

Mitsui OSK Lines is the world’s largest oil tanker company. Known as MOL, the corporation is one of the world’s largest shipping companies, with a fleet of over 930 vessels with a combined deadweight of 66 million tonnes (DWT).Tankers, steam locomotives, coal tankers, gas carriers, and offshore enterprises all fall under the energy transportation industry.

The China Ocean Shipping Company, or COSCO as it is more often known, is one of the world’s largest container shipping conglomerates. The company’s operations are currently extended across 40 countries, with a fleet of 500 container ships having a total capacity of 30,22,882 TEU.

CMA-CGM, France’s largest container shipping firm, was founded in 1978 as a consequence of a series of mergers between previously existing shipping companies. The company’s president, Jacques Saade, was a driving influence behind it being operational. The company currently operates a fleet of over 560 ships on more than 150 routes throughout the world. It can transport approximately 30,15,200 TEU.

Hapag-Lloyd, headquartered in Germany, is one of the most well-known and well-known international shipping corporations. The Hamburg-American Line and the North German firm Lloyd merged in 1970, resulting in the formation of the company.The shipping company now has approximately 235 ships with a total capacity of 17,24,565 TEU container carrying capability around the world.

check Also : From Where Should You Buy The Samsung Smartwatches Online?