Home Internet Is The Office Only Available on Peacock?

The Office is an awesome show, but can you really only watch it on Peacock in the US? Not that there’s anything wrong with Peacock, but you’d need to get an extra subscription if you were initially hoping to catch this show on Netflix.

Sure, you can watch the first two seasons for free. But that will only leave you wanting more!

So, where else can you watch The Office?

On Netflix, actually. Yeah, we know it sounds weird, but bear with us. We’ll show you why you can watch this show on Netflix, and how to do it in this article.

So Wait – Is The Office Still on Netflix?

Didn’t the show leave Netflix back in January to migrate to Peacock?

It sure did – but only in the US. This TV series is actually still available to stream on Netflix. It’s just that it’s available in other countries, not in the US.

We know it’s hard to believe, so here’s a tool that can verify you can still watch The Office on Netflix. It’s called StreamCatcher, and it’s an online service that uses VPN server locations to check which countries you can stream specific Netflix title in.

Right now, it looks like you can still watch The Office on Netflix in Canada, the UK, Japan, Sweden, and Australia. 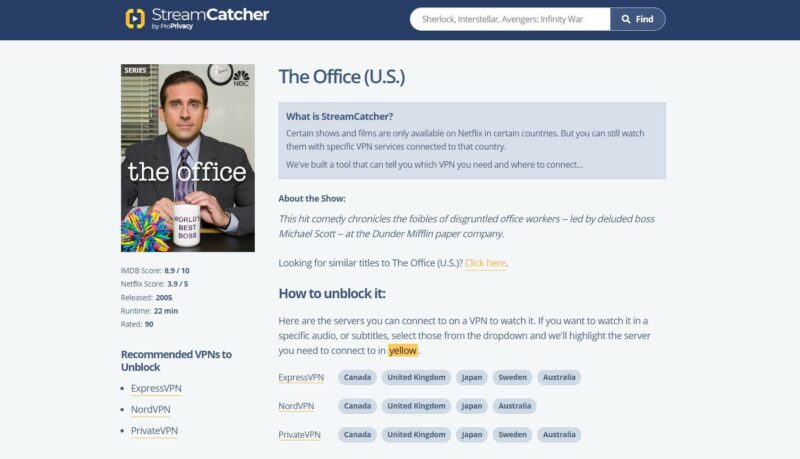 How Do You Watch The Office on Netflix in the US?

The easiest way to do that is to use a VPN. It will hide your IP, so Netflix won’t be able to see it anymore. Without that information, the site won’t know you’re connecting to it from the US. So it won’t geo-block your access to The Office.

Of course, you still need to make it seem like you’re connecting from a country where The Office is available. That’s the only way Netflix will let you watch this show. To do that, you’ll need to use a VPN server that’s in one of the following countries:

How do you actually use a VPN, though?

Which VPN Server Should You Use?

According to our tests, you should use a Canadian server. Why? Because it’s the closest one to you. That way, your data will travel faster between your device and the VPN server. So, you’ll get faster speeds, meaning you’ll have a better chance of watching The Office in HD or 4K.

You’re free to use the other servers too, but expect some minor or major slowdowns depending on how far they are from you. Just avoid the Japanese server. It’s not that it’s too far. It’s that it doesn’t have all season of The Office – just the first three.

Other Tips to Improve Your Netflix Speeds

Besides the distance between you and the VPN server, the VPN encryption will also slow down your speeds. It shouldn’t be a big slowdown. But if your ISP speeds are slow, you might have to settle for watching The Office in SD while dealing with buffering pretty often.

Still, there are some things you can do to improve your VPN speeds. Here’s what we recommend trying:

Can You Unblock The Office on Peacock with a VPN?

Sure, you can do that. We were able to watch episodes of The Office on Peacock without any issues with a VPN.

However, why would you watch it there instead of Netflix? Unless you have a Peacock subscription, you’ll only be able to watch the first two seasons for free. You’ll have to pay to see the rest.

To Sum It All Up

The Office is only available on Peacock in the US. But it’s also available on Netflix if you use a VPN. Just connect to a server in Canada, and you’ll be able to watch the whole series on Netflix (while also getting great speeds).

If you’d like to offer our readers some tips about unblocking Netflix titles with a VPN, please leave a comment. Also, if you know other ways to boost VPN speeds, we’d love to hear about them.