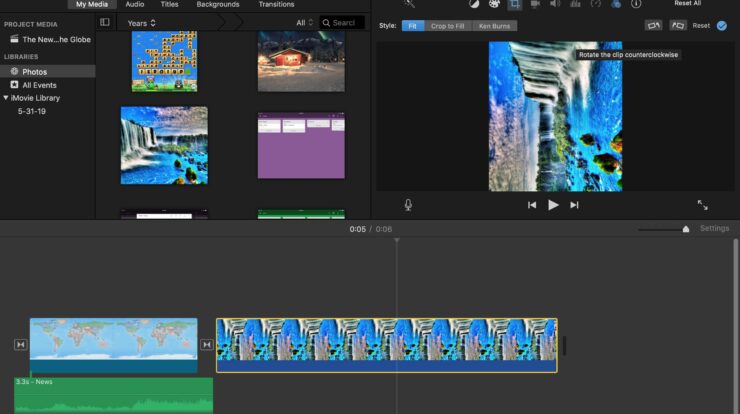 Are you looking for an alternative to iMovie?Examine a variety of best Video Editing tools that provide similar features at lower rates.Choose the finest iMovie competitor that matches your specific company needs to empower your team.

These are the following imovie Alternatives :

On Windows, Windows Video Editor is the counterpart of iMovie. It is free for all Windows users, much as iMovie. Microsoft created Windows Video Editor in the same way that Apple created iMovie. It was also released around the same time — the first version was published in 2000 with Windows Me. You may be more familiar with it by its previous names, Windows Movie Maker and Live Movie Maker. It’s simple to make a film out of your existing images. Simply choose the photographs you wish to use, determine the length of each shot, then clip or divide your film while editing. There are a number of alternative options available to you, including: Music from the built-in library can be added.

You can get Movie Maker for Windows 10 from the Microsoft Store. Despite the fact that it has a similar name to Windows Movie Maker, it is a third-party application. It is, however, rather good — and it offers a free plan. You can do the following using Movie Maker:

Add fade-ins, fade-outs, and other effects to your music. So, what are some of the free plan’s limitations?
If you opt to remain with the free plan, keep the following in mind:

For Windows users, OpenShot is a fantastic open source alternative to iMovie. Unlike iMovie, you may inspect, alter, and distribute the source code since it is open source. It is, however, a more powerful tool that allows you to do things like create animations, fades, transitions, and even 3D animations and animated text. You may display your sounds as wavelengths and then export them as part of the movie.

OpenShot was first released in 2008 for Linux-based devices. It was, however, later made accessible for Windows devices as well. It’s completely free to use, and there’s a tremendous community of users and developers that help the project by reporting issues and creating fixes. Even though OpenShot is and always will be free, you can give if you so choose. Donating to the project will help it continue to exist, given it does not have any other money streams like Apple.

OpenShot is also a breeze to operate. Although there is a learning curve with open source projects, most users will have no issue understanding out how to utilise OpenShot.

HitFilm Express is number four on the list. Are you looking for a more powerful iMovie replacement on Windows? HitFilm Express is a free video editing programme that is among the best and most often used. HitFilm Express is compatible with both Windows and Mac computers. One of the nicest things about HitFilm Express is how simple the workflow is, as well as how user-friendly the UI is.
You may simplify your process by doing the following:

Vertical videos are supported, with a blurred version of the video made for the backdrop frame, allowing you to submit the video to YouTube or other sites.

360-degree films, including footage from your GoPro, may be edited. Take a 2D video and convert it to a 3D video.

HitFilm Express is also useful for repairing footage and preparing it for professional presentations.
You can, for example:

FilmForth is a fantastic free video editor for Windows that touts itself as a “perfect replacement” to iMovie.It is simple to use, just like iMovie, yet it still allows you to make stunning videos.

You can do the following with FilmForth:

Animotica can be used for a variety of purposes, including:

Do you have a video that is choppy and of poor quality? With only a few clicks, you can stabilise and increase the quality with Animotica. You may also record your screen and camera using Animotica’s screen recording feature.
After you’ve made a screen recording, use the Animotica software for Windows to modify it. Although Animotica is ideal for novices, it does have a significant drawback. Every video will have a watermark if you are using the free version.

However, if you simply use Animotica for your personal Instagram stories, this won’t be an issue. For a few bucks, you can also get the watermark removed from all of your movies.

VideoPad Video Editor is number seven. VideoPad is a video editor that is available for free. Despite the fact that some capabilities are locked behind a fee, it’s still a superb Windows alternative to iMovie. You may post movies in nearly any format, and you can also upload audio files in almost any format. It can really play over 60 different video formats. The programme also allows you to capture video and audio from scratch. You may add sound effects to your videos using VideoPad’s official library, but you can also submit your own original audio. Green screen creation is supported by VideoPad, and you can even convert 2D video to 3D video. Make a slow-motion video or increase the speed of your video.

Although certain services are only available to paying members, you may try them out for free during the trial period.
You can continue to use VideoPad for free after that, but it will be more limited. You may either export a video to submit it to your website or social media networks, or you can burn it onto a real DVD.

If you’re using Windows, Vega is a fantastic alternative to iMovie.
It features a simple UI with a black backdrop that I’m confident you’ll find user-friendly.

more. There are many ratio aspects and resolutions to choose from when exporting your video. Also, you can upload your video from Clipchamp directly to YouTube, Dropbox, Box, Google Drive, and more. On Windows devices, Clipchamp is a great alternative to iMovie, and you can even use it to make marketing and sales movies.

Clipchamp, on the other hand, includes a few extra functions that will make your life simpler. You may use over 800,000 stock movies, music tracks, and animated GIFs in your videos, for example. There are also hundreds of templates you may use as a starting point for your films. The text-to-voice function is another fantastic feature.
You may type the voiceover text instead of recording your own voice for a voiceover, and the programme will speak for you.

Unlike many other free video editors for Windows, VideoShow does not add a watermark to videos that are exported.
Depending on whether you’ll be publishing your video to Instagram, TikTok, or another platform, you may pick from a variety of aspect ratios when exporting.

You can also accomplish the following using VideoShow:

VideoShow lets you to merge your individual photographs into a photo slideshow, replete with transitional effects between photos, in addition to generating and editing films.

VideoShow is an excellent programme to use if you don’t have any technical abilities but want to produce basic films or picture slideshows for social media on your Windows laptop, similar to how you would use iMovie.

If you only need to edit your images into short films or slideshows, King Loft’s programme, Movie Maker for Photos, is a great alternative to iMovie. Slideshows display your photographs in a continuous stream without requiring the user to tap through them, although movies are a little lengthier.

Blender is a free 3D modelling programme that includes a variety of basic and expert video editing features.
It is open source, unlike iMovie, and is funded by contributions.You may trim and splice films as well as perform more advanced edits such as colour grading.Waveforms may be seen, and audio can be scrubbed, synced, and mixed.Utilize the 32 slots to add films, sceneries, photos, and more. You can also speed up or slow down your video, add transitions and adjustment layers, and use the 32 slots to add transitions and adjustment layers.

Blender, on the other hand, is much more than a video editor.Animation, rigging, sculpting, and scripting are among the other features. Blender may be used for a variety of tasks, including game development, VFX, animation, modelling, and more.Because Blender is completely open source, you are free to sell any work you generate with it – you can even use it to make movies for your customers if you are a professional photographer.

If you need something more professional and powerful for Windows, DaVinci Resolve is a wonderful alternative to iMovie. According to DaVinci Resolve, it provides the same tools that Hollywood experts use for studio projects – for free! DaVinci Resolve has a premium version that you’ll need if you want to use all of the features and capabilities.
However, the free version is also quite excellent, and it will most likely enough if you have previously used iMovie.

DaVinci Resolve is more than just a video editor; it’s a complete set of tools. The following are some examples of video editing features:

DaVinci Resolve isn’t as user-friendly as iMovie, in my opinion. In fact, it has a higher learning curve, especially if you want to learn how to use all of the functions available. However, if you want to test Hollywood-level editing software, it is a superior alternative.

Finally, I’d want to bring up Olive. It is open source, unlike iMovie, however it is presently only accessible as alpha software.Software that has been pre-released and is presently being checked for problems is referred to as alpha software. You’ve probably heard of beta versions of programmes, which are software that has passed the alpha stage and is being tested by real users to see if they identify any flaws. The creator is currently testing the programme, but it has been prereleased.

Olive comes in two varieties.The earlier version does not have any support, but it has less issues because it has been around longer. It’s possible that the newest version contains additional bugs. Olive includes various unique features, such as node-based compositing rather than a set pipeline, despite the fact that it is still in the prerelease stage.

Olive also has comprehensive colour management and editing tools, as well as a disc cache that works in the background to make playing more fluid. The Olive project is still in its early stages. It is not recommended for beginners because the release is still unstable. However, if you’re used to beta software or have the patience to wait until Olive is officially published, I think Olive is a fantastic alternative to iMovie. To Sum It Up: What Is The Best iMovie For Windows Alternative? Windows Video Editor is the greatest iMovie replacement for Windows. It’s the official Windows alternative, and it comes pre-installed on all Windows 10 machines. You may already have it on your computer if you have an earlier version of Windows; it was formerly included with the Windows Essentials Pack. Although Windows Video Editor is not the most advanced video editor, it is free and ideal for beginners.